Where are Swiss companies going? Businesses numbers rise in Zug but fall in Zurich

Zug, Thurgau, Lucerne and Valais recorded the highest net level of inward relocation
The highest level of net inward relocation from other cantons was experienced by the canton of Zug, at 119 companies, followed by Thurgau (106), Lucerne (89) and Valais (62). A comparison between the cantonal tax rates charged on corporate profits reveals that the rates are low in the first three cantons in this ranking table. The canton of Zug mainly attracts businesses from Zurich (272), Schwyz (85), Lucerne (78) and Aargau (42). Thurgau benefits from the relocation of businesses from the cantons of Zurich (94) and St. Gallen (84). The canton of Lucerne reports its highest net inward relocation from Zug (89), Zurich (80) and Aargau and Nidwalden, with 39 companies each.

Jobs
In parallel with company relocations, the individual cantons also gained or lost workplaces. In this instance, the size of the company and its legal structure also played a role. For example, the canton of Geneva experienced a net outward movement in terms of the number of companies, but scored highly in the number of newly-arrived jobs.
The canton of Zug registered the highest net rise, with 1839 employees. The largest proportion was made up of “Aktiengesellschaften” (public limited liability companies, PLCs), with 1770 employees, followed by cooperatives (173) and foundations (81). The canton of Lucerne registered an increase of 1309 employees, of which 1247 worked in PLCs and 299 in GmbHs (limited liability companies, Ltd).
The largest drop in the number of employees was reported by the canton of Aargau (-2573), followed by Zurich (-1433) and Bern (-1139).

French-speaking Switzerland
The canton of Valais reported the largest net growth within the French-speaking area of Switzerland, with 62 businesses, followed by the cantons of Vaud (13) und Jura (5). Valais mainly attracted companies from Vaud (89) and from Geneva (39). The canton of Vaud recorded the highest number of inward company relocations from the canton of Geneva (132), followed by Freiburg (71) and Valais (66).
In contrast, Neuenburg (-16), Freiburg (-15) and Geneva (-11) experienced an outflow of companies. The developments in the net growth of the number of employees in the workforce is interesting. In this respect, the canton of Vaud heads the list, with 716 employees, followed by Freiburg (484), Valais (263), Geneva (182) and Jura (65). Neuenburg is the only canton in the French-speaking area of Switzerland that experienced a fall in the size of the workforce (-149).

Ticino
Ticino recorded a net outflow of 44 companies. Most of these companies moved their headquarters to Graubünden (59), Zug (40) and Zurich (24). The number of employees also fell in Ticino, by 161. The reduction within PLCs was -168, and there was also a drop of -32 within foreign subsidiaries. On the other hand, the numbers rose by 24 in foundations and by 15 in “Ltd” businesses.

About the survey itself
This survey examined all those companies who were entered into the commercial register and who relocated their business headquarters within Switzerland during 2018. The information about the numbers of employees is based upon a statistical model.

The full study can be requested from presse.ch@crif.com. 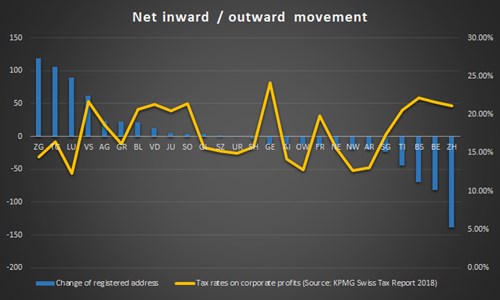