Rise in debtor ratio
The calculation of the CRIF Debtor Ratio of 6.1% takes every private individual in Switzerland into account. This result represents an increase of 0.5% compared with 2017, when the equivalent debtor ratio amounted to 5.6%. The actual number of debtors in Switzerland has also risen again, from 471,816 in 2017 to 517,962.

Although the debtor ratio has deteriorated in all the Cantons, some significant differences do exist between them. The Cantons with the highest debtor ratios are Neuenburg, with 10%, followed by Geneva with 9.9%, Basel-Stadt with 8.2% and the Vaud, with 7.8%. Appenzell Innerrhoden is the best-performing Canton in Switzerland, with the lowest debtor ratio of 1.5%. In the central region of Switzerland, the Cantons of Uri, Nidwalden, Obwalden and Zug also display low debtor ratios.

Cities with high debtor ratios
We normally observe higher debtor ratios in the cities than we would in the more rural areas. The poorest debtor ratio is shown by Biel/Bienne, at 11.3 %, followed by Geneva (10.8%) and Bern (10.5%). Zurich, the largest city in Switzerland, has a debtor ratio that is below the Swiss average, at 5.8%, and has the lowest debtor ratio of all the cities investigated.

Striking disparity between town and country
A comparison between the debtor ratios of the largest cities and those of their corresponding home Cantons shows that the 11.3% debtor ratio in Biel/Bienne is twice as high as that for the Canton of Bern, with 5.5%. A similar town/country disparity is to be seen in the Canton of Lucerne, where the city’s debtor ratio is 8.3%, while that of the Canton is just 4.7%.

*CRIF rate of defaulting debtors
For the purposes of determining the CRIF rate of defaulting debtors, all individuals were taken into consideration that had enforcement proceedings following requests for continued enforcement, bankruptcies and loss certificates. CRIF obtains this information from 500 companies across Switzerland. The survey was carried out on January 31, 2017. 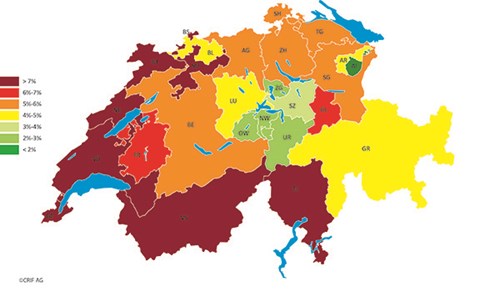