CRIF study on the demise of shops in Switzerland – just under 32,000 shops have disappeared in the past 10 years

If we compare the closures with the number of newly-opened retail outlets, we can see that growth was negative in the years from 2009 to 2015. More shops were closed than were set up during this period. 2016 saw a small recovery, while more new shops were also opened again in 2017 and 2018. In 2019, however, there was another sharp rise in closures compared with new shop openings.

Clothes shops are the most likely to close
Most of the closures during this reporting period occurred in clothing shops (2,026), newsagents (1,719), specialist retail food outlets (1,420), retailers of IT equipment and software (1,375), shops selling sports goods (1,084) and retail outlets for flowers and plants (1,004).

Fewer computer shops
A comparison between closures and new openings reveals that computer shops recorded the most significant decline, with over 50% fewer new set-ups. Sports and clothing shops also reported negative growth. On the other hand, there are frequent openings of shops selling flowers, specialist retail food outlets and kiosks.

Almost 30% of newly-opened shops are later closed again
Many newly-opened shops disappear again very quickly. Of the 28,637 shops newly opened over the past 10 years, 29.8% subsequently closed. A fifth of these shops had already closed by the end of their first year, while 17.6% had closed after 2 years.

Ticino has the highest growth
Over the last ten years, most closures occurred in the Cantons of Zurich (4,432), Vaud (4,341) and Bern (3,742) – but they are also the Cantons with the greatest number of new openings: Zurich (4,354), Vaud (3,271) and Bern (2,655).
A comparison between closures and openings produces a different picture. The Canton of Ticino demonstrates the highest level of net growth in the number of retail shops, followed by Lucerne, Aargau, Freiburg and Schwyz. The Cantons of Bern and Vaud report a deficit of over 1000 shops, all of which have gone out of business.

About the survey process
In this survey, we took account of all those retail trading shops that were entered into the Commercial Register, and had either been closed or were newly opened over the years between 2009 and 2019.

The full analysis can be requested from presse.ch@crif.com. 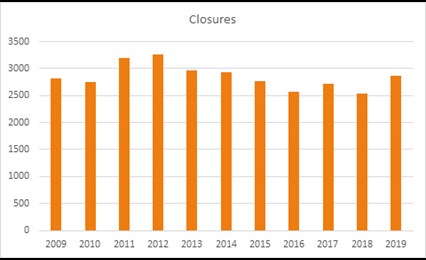